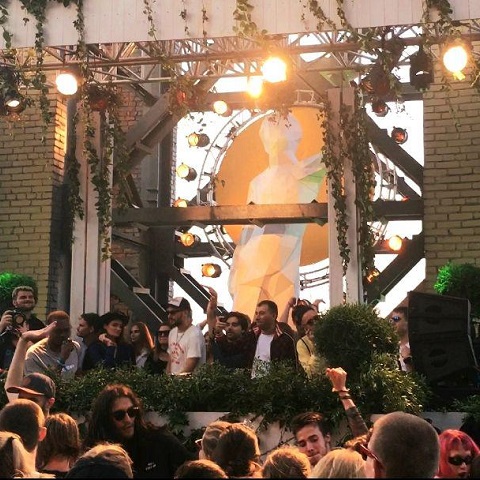 With no doubt, the Present Perfect Festival is the main party of the year dedicated to electronic music in the northern capital – St.Peterbourg, Russia. In my opinion, PPF is the quintessence of scale, quality organization, and music in all its possible manifestations, created by the ROOTS UNITEDteam.
I attended the festival twice, in 2017 and 2018, and I want to point out that the progress from one year to another was tremendous.

That year, the event was held at the museum of street art mostly open-air and therefore the atmosphere and the impression, in general, was dumped by heavy rains. Not all, but most of the locations were open-air and the “tropical” St. Petersburg rain would not stop till the morning. This has led to all covered locations being overcrowded, moreover, it was very humid and stuffy, it was completely uncomfortable to move in the rain, but even under unlucky circumstances, it was not too bad. Good party organization helped PPF not to drown. My headliner of that year was The Black Madonna who played at the garden stage. Then the Boiler Room took place at another stage, which is kind of a separate event for the St. Petersburg scene. The music program was good enough at every stage, I liked it.

The Present Perfect Festival 2018 has been already truly European level of organization. This is what I liked the most! Imagine that you were at the party where someone maximally took care of everything for your comfort. Apart from the vast territory in Севкабель Порт / Sevkabel Port there were 5 stages – each one had a very unique concept, there were a lot of chill zones where you could lie down, sit and swing. Also, there were a lot of bars, food courts with a variety of food, smoothies, merch, whatever you want. Of course, there were big queues at the bars but where have you seen empty bars at the party?
In terms of the payments process, the Tokin system was implemented, but not an ordinary one, they provided to guests the Tinkoff Bank cards at the entrance and you could just throw yourself 500 rubles on it and pay wherever you want, and even within 30 days after the festival ended you could still use the card. Definitely way better than a plastic token that you always lose and waste money if it was not spent.

The statement that Present Perfect Festival is a festival and not just a party can surely be confirmed! There are a lot to explore, you feel like you are a small child again and there is, at least Disneyland in front of you. Finally, you explored all the areas and now its about the right time to enjoy the music. Must admit that in solely my opinion the musical program was a bit weaker than the rest of the organisation. During the whole night, we cruised from one stage to another, and could not stick anywhere. The most important, we indeed love variety in music, and an opportunity to try different genres was there. Everything seemed to be so great, but for some reason the musical satisfaction we could not reach. I would guess that we used all the emotions while enjoying the amusement zones and there were not many emotions left for the music anymore. For example, headliner Nina Kraviz more represents the scale and prestige of the festival rather than music quality. The garden stage had some really good artists and good vibes but it was overcrowded, the main stage vice versa was able to accommodate a lot of people, but no one would go there. The Boiler Room stage – was exciting in the beginning but would become boring in a short while. So we kept moving.

To summarize Present Perfect Festival is already a huge achievement for St. Petersburg and Russia. This is quality, plenty of positive emotions and an excellent organization. Do not spare money for a ticket, just go and have fun. As for music, this is my subjective opinion, it could have been better and I hope it will be in 2019. It is difficult to say what determines the musical vibe of the party. The questions if it worth visiting PPF – definitely worth it.